I've seen testing, especially acceptance testing, done horribly wrongly over the years, and sadly I often see the same anti-patterns repeated over and over; so I thought it'd be worth talking about my perspectives on this thorny subject.

First off, I think it's worth emphasising that automated testing is at the heart of agile software development. Agile development assumes "building quality in", and that means tests. I've seen places with no tests, or nothing but a suite of slow fragile end-to-end tests run on a snowflake environment, who want to "go agile". You can't just "go agile" without a solid underpinning of low-level tests that enable you to move fast without breaking things. Going agile without good tests is like embracing modern surgery but skipping all that pointless handwashing stuff.

All of this is doubly true when moving towards continuous delivery - I strongly recommend people read the "Technical Practices" chapter in "Accelerate" 1 (really, just go read the whole book - it's awesome, providing the data behind the benefits of agile and CD).

A classic metaphor in automated testing is the test pyramid:

it's been a useful model for ages, and still a good conversation starter, but it lacks a few things:

I recently came across a new-ish metaphor: the Swiss Cheese model of testing - which I quite like. It's a lot more nuanced than the old Test Pyramid, and helpful when it comes to talking about both why we test, and how we should test.

The basic idea is: consider your tests like a big stack of swiss cheese slices - you know, the kind with holes in them: 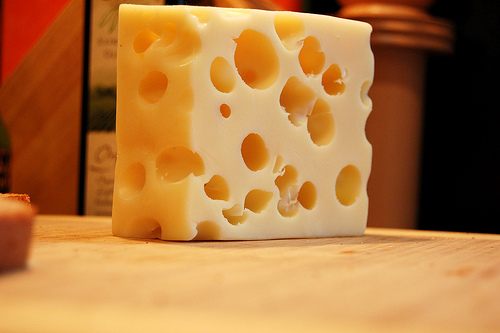 Now layer those cheese slices vertically - each layer represents a different kind of tests. Order them in the order you run them - usually simplest, fastest feedback first, then slower layers below them:

You can imagine defects as physical bugs which fall down the diagram, and are caught at different levels - different slices of cheese.

Some bugs might fall all the way through a series of holes and not get caught. This is bad.

Each layer, and each kind of test, has different tradeoffs such as:

Note I haven't prescribed what the precise test phases are - there's a lot of "it depends" on choosing your tests. There's a whole other blog post to be written about my preferred test layers!

A basic principle here though is - don't repeat yourself. There's not a lot of value testing the same thing multiple times. The cheese layers will always overlap a bit - but if you have a fast simple unit test to verify the text of a validation message, don't also have a slow fragile browser-based end-to-end test that verifies the same thing.

This is especially true of manual tests - the typical top of the classical test pyramid. You shouldn't manually re-test what you have automatically tested. You might "kick the tyres" to make sure that everything works OK. You might test in production, relying on monitoring and A/B testing to identify problems early. But you really want to catch everything you can before that point.

Also it's somewhat up to you to decide what is most appropriate for which layer. Fast feedback is good, but so are clear expressive tests that are easy to change. A classic example is database interactions - it's almost always better to test against a real database, possibly an in-memory one, than to try to mock it out.

One "cheese slice" I definitely don't want to see is the "acceptance tests" slice. Don't get me wrong, I love acceptance tests, I love the idea of defining "done" for a user story by clear unambiguous tests.

But too many people assume there must be an accepance test stage - a single "slice" in this model - which contains all the acceptance tests. This means those tests usually end up near the bottom of the pile, in a suite of large slow expensive browser-driven tests, that have to run against a production-like environment.

Sure, that's appealing - lots of us started like that, learning the magic of BDD and Cucumber and Selenium, building amazing suites of exhaustive browser-based tests. But that magic was slow, and fragile - and no amount of tinkering with clever setups and special approaches got past the fact that the tests took far far too long to run, and were fragile, and hampered rapid development.

Besides, they encouraged people to only think of "acceptance" in terms of "clicks and buttons" - where were the tests for "it should handle network failures gracefully" or "it should send exception logs to the auditing system"?

(I do think there's value in some browser-driven end-to-end tests - there are bugs you can only catch that way. But call them "smoke tests" or "end-to-end tests" or something, not "acceptance tests". If you want lots of tests of UI features, consider tools that test within the framework you use, like enzyme for react - you might want several "cheese slices" of UI tests - see how the material UI tests are layered for an example.)

In my opinion, acceptance criteria should be tested at whatever level is most effective for testing that requirement:

If you really feel the need to trace acceptance tests back to stories, you can probably work out a way to tag the tests and report on them somehow - but I'd ask, why bother? Are you ever going to use that information? Maybe it's sufficient to just list the tests in the stories, and check they are there as part of signing the story as done, and not try to track the relationship beyond that.

User stories are a point in time, tests are forever

Another problem with an Acceptance Test layer, is that user stories express the requirements at the time the story was written - usually with changes right up to the point of delivery. At the time of finishing a story, acceptance tests will demonstrate it works - but the next story, or the one after that, will change the behaviour. If your tests are too strongly structured around the stories, they can hamper change - you need to think "OK, it's now the Flawed Motor Company, I need to find all the old acceptance criteria that might have tested for this".

And again, this is especially time consuming if that test is in a UI-based test suite which takes a long time to run and is hard to debug.

If your acceptance test was just a note in the original story "this is demonstrated by the view-layer test XYZ" then you wouldn't need to change anything except the single failing test - if there was ever a pressing need to prove the original acceptance criteria were checked, a code archeologist could dig through version control history to find the test XYZ at the time the story was completed.

The QA role and test slices

This also highlights a common organisational problem - when there is an individual or team whose role is entirely Quality Assurance, and who tests independently to the rest of the team.

It is only natural that this kind of QA will tend to work at a single layer - without close collaboration with developers, it is next to impossible to work with unit test or other fast feedback layers.

And this is a reason why you shouldn't test this way! Don't get me wrong, I'm not advocating getting rid of QA folks - a good QA specialist can be an invaluable team member. But they should be working with the developers, to encourage them to write good tests, to spot the gaps in their test automation, and to provide a vital whole-project perspective on quality.

The "Accelerate" 1 folks put it better than I can:

Developers primarily create and maintain acceptance tests, and they can easily reproduce and fix them on their development workstations.

It is interesting to note that having automated tests primarily created and maintained either by QA or an outsourced party is not correlated with IT performance.

None of this means that we should be getting rid of testers. Testers serve an essential role in the software delivery lifecycle, performing manual testing such as exploratory, usability, and acceptance testing, and helping to create and evolve suites of automated tests by working alongside developers.

The best QAs I've worked with were awesome assets to the team. They didn't write that many tests on their own though - instead they worked closely with developers to ensure that they understood their tests, that the tests covered as many cheese holes as possible, and that the test fitted in with their big-picture vision of the overall testing suite - Were tests at the right level? Was enough being tested? Were acceptance criteria being met? And what areas would still need exploratory testing?

Comments? Questions? See the comments section at the bottom of this page.

Wikipedia has an article about this metaphor in accident causation - this seems to date the idea back to 1990, when looking at layered threat mitigations

Glennan Carnie - the Swiss Cheese Model is a good introduction to the metaphor, but seems to talk more about static analysis than kinds of tests

My colleague Sarah Hutchins wrote this article recently about the Swiss Cheese Model - with a bit of a different focus, looking at strategic decisions about what to test where. Vinod Kumaar R's article has more useful perspectives.

Martin Fowler has a good basic article about the Test Pyramid in his bliki, and the same site also has Ham Vocke's article with more practical examples