A geeky kind of sabbatical

I am on sabbatical! After 10 years at Thoughtworks, I'm getting a nice long break. (I've actually been on sabbatical for a few weeks - school holidays plus usual procrastination delayed this post…)

I had to decide, a while ago - what would I do on my sabbatical? Some people use them to travel, to see the world, to expand their horizons - but I have two small kids, so that really didn't sound much like it fit this stage of my life!

Instead, I wanted to think about things I could do while largely staying at or near home. On thinking further, my main life goals at the moment are:

Several of these are overlapping - I started on a venn diagram but it got a bit messy!

However, I'm also a big geek - one thing that satistfies my "Mental health" and "Learning" areas is to actually write some code. To build something of value, and share it with others. This is especially the case as I haven't been on a proper software delivery project since 2020 - I've done some fascinating work, but I have felt a bit disconnected from the art of writing code.

So - a major goal of my sabbatical is to try to make some big improvements to my pet project, the Polyglot Code Tools. It might not sound much like a holiday to some! But I love it.

I'm also doing plenty for the other categories - I'm back doing weekly yoga (which is awesome), I had a great summer holiday with the kids and my mum, and I've done lots of life-admin tasks that I won't bore people with here. I'm also going to try for a few long bike rides - but right now I'm scratching my "I want to code" itch!

I have a few big epics planned around my tools - some of them are already done or nearing done! For example, you can now assign users to teams, and visualise which team has changed which areas of code most in a particular timespan: 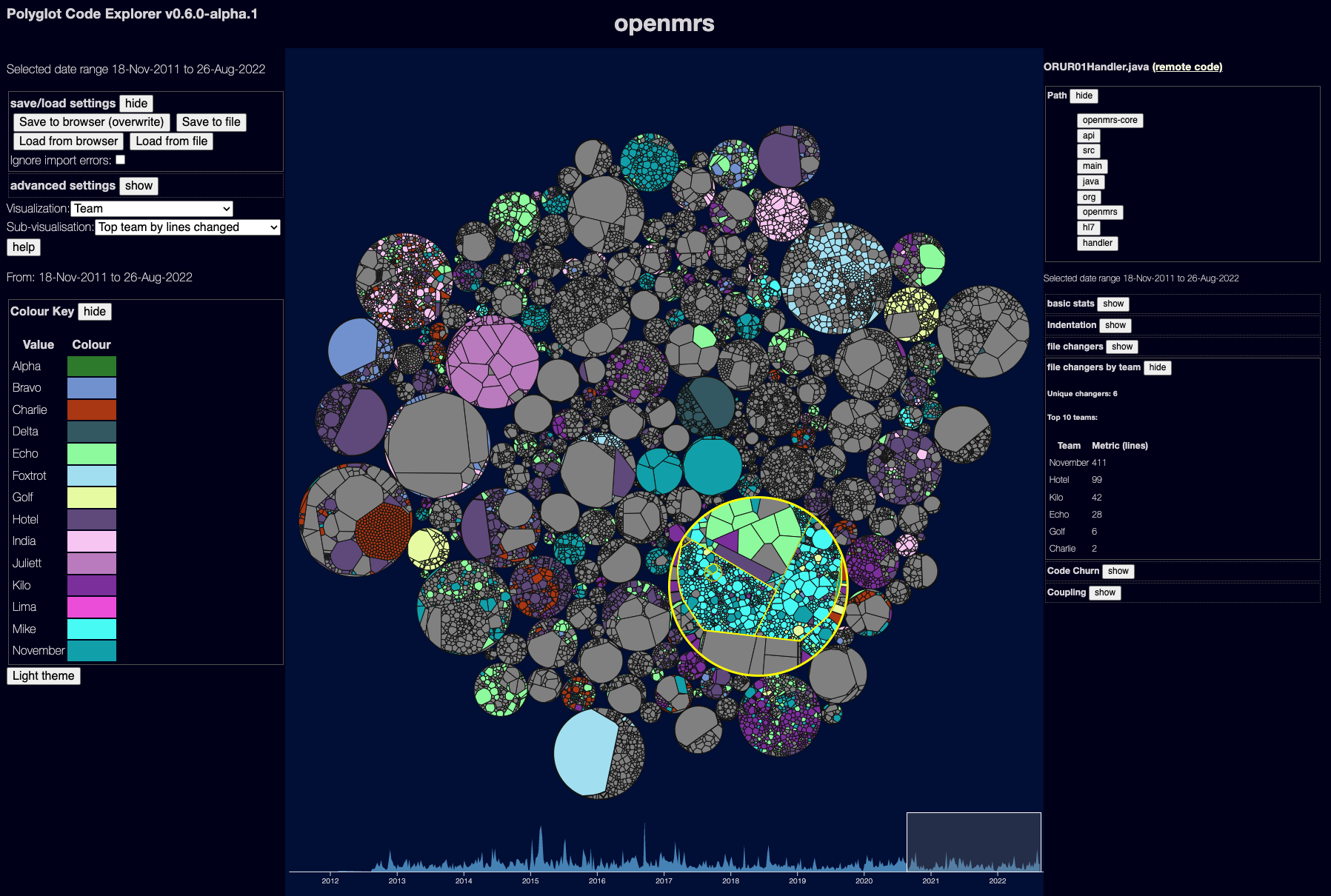 This was from code I hacked together at a client, I've now re-written it cleanly, in TypeScript, and it is mostly working.

Important tasks but not really epics

Please send me your ideas

If anyone out there has used the polyglot tools, or might be interested but can't for some reason, I'd love to hear your thoughts. What might you be interested in seeing in a code visualisation tool?

Also, I'd love suggestions of open-source code I can look at as examples. I can't publish examples based on client code, so I'd like more real-world projects that are a bit like business code:

If you have any ideas, please contact me on mastodon or twitter (you can comment on this blog too, but it doesn't get checked all that often!)

Quick update 28th September - I really didn't anticipate just how much impact sleep deprivation from our lovely daughter was going to impact my plans. I've done quite a bit (more blog updates to come) but I also need to lower my expectations a bit - I am focusing more on mental health and getting the family through a difficult year, than getting a vast amount done.

So I'm going to release some cool stuff, update the docs, and all that. But some of the later epics might have to wait a few more months / years!